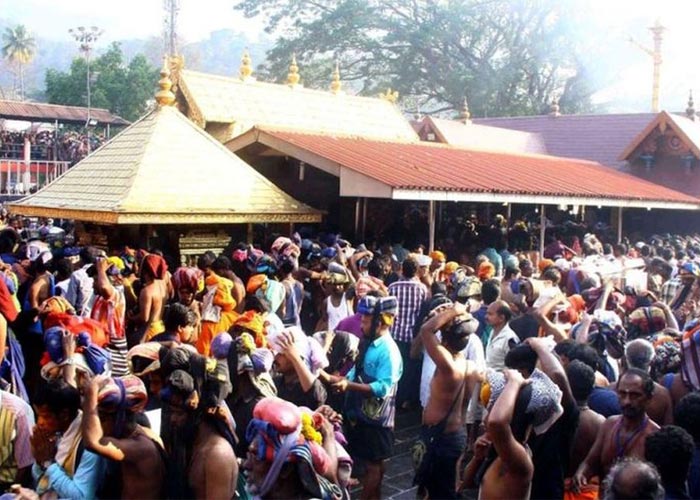 Today, the Five member Constitution Bench of  Hon. Supreme Court  has given its final Judgment referring the issue to a larger bench of 7 judges,  in the Sabarimala Case on the various review petitions filed challenging the unfortunate Judgment of 28th September, 2018. Sabarimala Ayyappa Seva Samajam along with crores of Ayyappa Devotees welcomes the Verdict of Hon. Supreme Court.

This may be considered as a boon given by Lord Ayyappa  to His devotees, who were patiently waiting  with prayers for this auspicious moment.

Last year, from September 28th onwards, Ayyappa devotees all over the world were pushing each day with painful hearts. The humiliating actions of the Kerala Government were more painful than the blow given by the unfortunate Judgment. Kerala Government even resorted to pushing atheist activists crushing the age old traditions and rituals of Holy Sabarimala pretending that they were protecting the constitution in the Sabarimala issue. Nilakkal, Pampa and  Sannidhanam regions were brought under the direct control of Senior Police officials of DIG rank. First time in the history of Sabarimala pilgrimage, thousands of policemen wearing boots and equipped with rifles and other war equipments were deployed at the holy Sannidhanam. Devotees wondered whether they were trapped in a war-field. Devotees waiting in queue for performing Neyyabhishekam were made to run away, their resting places were made unusable pumping water. Singing of bhajans and Saranaghosham were declared as criminal offences and were put behind bars for days and weeks charging non bailable offences.

Shri. Ramakrishnan Guruswamy from Muchukunnu in Koyilandi, Kozhikode Dist. committed suicide with unbearable melancholy  caused due to the unfortunate judgment  and atrocities of the Kerala Government. Shri. Venugopalan Nair, another devotee also laid his life self immolating near the satyagraha panthal at Thiruvananthapuram. The decomposed dead body of another devotee Sri. Sivadasan Achary, who was returning after darsan at Sannidhanam was recovered from the bushes near the road,  days after the cruel, atrocities of Police at Nilakkal. Shri. Chandran Unnithan swamy, who was participating in the Namajapa yathra at Pandalam was killed by pelting bricks on his head by the devils. A poor devotee father died on the spot witnessing the tragic scene of arresting his innocent and pious son charging false cases by the police. We place with Pranams this historic Judgment of  Hon Supreme Court as wreath on the tombs of these five martyrs.

Many leaders and workers of various Hindu organizations, who spoke and worked relentlessly in favour of  Sabarimala and Devotees, were put behind bars with various offences imposed on them, forced to suffer mental and physical torture. Thousands of mothers and sisters came out in the streets chanting bhajans and saranaghosham to protect their age old traditions, faith  and rituals. May this Judgment give  a solace to them all!

The Chief Priest (Thantri) of Sabarimala, Heirs of Pandalam Palace, leaders of various Hindu, Community organizations and their workers, Advocates who worked relentlessly, collected all the required materials, studied and argued to win the Case in Court, all the print, visual and social media who broadcasted the actual situations at Sabarimala and related issues, Live 24×7, worked hard from the Opening time till the Closure of the front doors of the Sabarimala Sannidhanam and even during night to protect the rituals – our pranams to all of you!

Moreover, crores of devotees were undergoing a penance – tapas- for the last one year with prayers, waiting with abstinence and cent-percent hope. Sabarimala Ayyappa Seva Samajam consider this Judgment as a Temporary Boon gifted by Lord Ayyappa to His devotees in response to their dedication, devotion, determination and prayers and hence along with these cores of Ayyappa Devotees all over the world, we, Sabarimala Ayyappa Seva Samajam welcome the Judgment.

In the present scenario, we have only one request to the Kerala State Government. Leaving all the past, the Kerala Government, Travancore Devaswom Board and Police may rise to the occasion and extend all help and arrange required facilities to the lacs of devotees thronging to Sabarimala during the coming Mandala- Makara Vilakku season for peaceful darsan and to conduct Neyyabhishekam and other Offerings.

Previous Post
Panchalikulam – (The Pond Of Panchali), believed to have been constructed by the Pandavas
Next Post
Tatwamasi
Menu