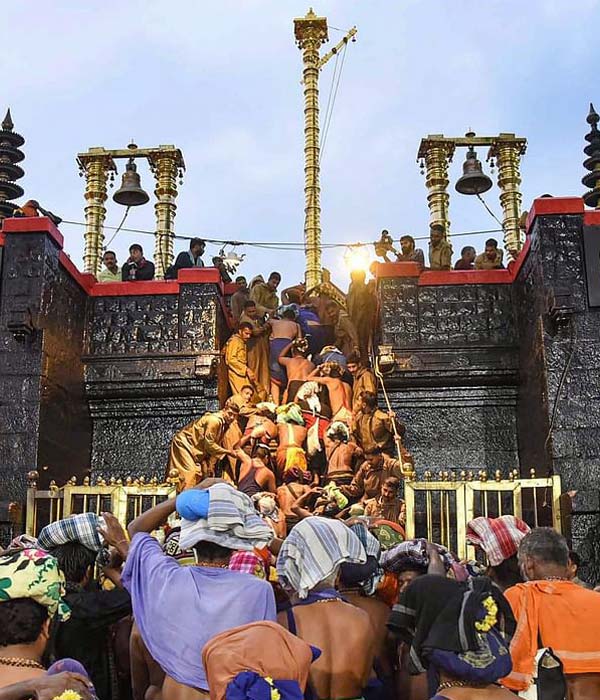 To emerge as a truly representative body of Ayyappa devotees across the world to protect, preserve and propagate Ayyappa Dharma as embodied by the holy shrine of Sabarimala, rising above caste, class and language barriers and through this, work towards Hindu unity and national reconstruction.

SASS mission is to be an agent of social change using the above 5 means.

SABARIMALA AYYAPPA SEVA SAMAJAM (SASS) is an Organization of devotees of Lord Ayyappa worldwide. It was established as a Public Charitable Trust on 13th November, 2008, at Pathanamthitta in Kerala State, India. Holy Sabarimala Temple is located in this district.

Within a short span of time SASS established itself in the southern states of Tamil Nadu, Pondichery, Karnataka and Andhra Pradesh. Over the decade, SASS has spread over to 13 states in India. Devotees of Lord Ayyappa, wherever they live are eager to be part of the growing family of SASS. Day by day SASS work is getting started in other states of India as well as in other countries.

There are many organizations in the field of service in the name of Lord Ayyappa. What makes SASS unique is its overarching vision. SASS is much more than a spiritual or devotional organisation. Its vision encompasses the larger canvass of Hindu society. Through its activities of congregation and worship (Satsang), spiritual education and practice (Swadhyay), community service (Seva), inculcating a sense of brotherhood that transcends caste, class and linguistic barriers (Samarasta) and engaging the community in peaceful, democratic struggle against political machinations (Sangharsh), SASS aims to cleanse the Hindu society of its ills and bring about larger unity. In line with its vision, SASS brings together Ayyappa devotees from all social and linguistic backgrounds.

SASS also plays an important role in bringing together all stake holders of Sabarimala Temple and Ayyappa Dharma, viz., Tantri, MelSanti (Chief Priest), Raja of Pandalam Royal Family (reckoned as the father of the deity), Seers (Chiefs of Ashrams), Guruswamis (those devotees who have several years of austerity and pilgrimage to their credit), lay devotees (Ayyappa Swamis) and indigenous tribes that traditionally had a stake in various temple rituals towards a single goal: protect the holy temple and its traditions and nurture its sanctity.

SASS’ activities are year round, not limited to the Mandala season alone.

Some service activities of SASS at Sabarimala are:

SASS organisation has active units in 13 States in India. Here is the key statistics:

SASS is comprised of devotees of Lord Ayyappa doing organizational and community work as a Service and are called Ayyappa Sevaks. There is no membership or membership fee. However, to identify the Sevaks, Identity Cards are issued by the State Unit concerned.

Ayyappa Sevaks make a one time contribution of Rs.1,000/- to the Organization. This donation will cover the cost of preparation of ID card and expenses related to organizational work. It is non refundable.

How to enrol as an Ayyappa Sevak? Click here.

Ayyappa Yogam is the basic functional unit of SASS. It is a family-centric program i.e., all family members are expected to take part in the program. Members of an Ayyappa Yogam is usually families from the neighbourhood within a radius of a few kilometers.

‘Yogam’ means ‘coming together’ or congregation. The word ‘Ayyappa’ is prefixed because Lord Ayyappa Himself organised Ayyappa Yogams during his life time.

Shri Dharma Sastha, during the period of his incarnation (Avatar) as Ayyappa, the son of Raja of Pandalam principality in Kerala, organised youngsters from the neighbourhood under the name ‘Yogam’, imparted physical and mental training such as ‘Kalari’- a martial art and prepared them for war against the demonic forces, for the purpose of saving the righteous and protecting ‘Dharma’.

were considered important. Only the first two Yogams are still in existence.

‘Petta Thullal’ – a form of dance (accompanied by Nadaswaram and Sarana ghosham – chanting ‘swamy thinthaka thom, ayyappa thinthaka thom’)  by Ayyappas – devotees- on 12th of January every year by Ambalappuzha and Aalangat Yogams at Erumely, en route to Sabarimala, is believed to be in continuation of the original Ayyappa Yogams started by Lord Ayyappa. Hence, the name ‘Ayyappa Yogam’.

Congregation of Ayyappa devotees including women and children held at a predetermined location such as temple or hall or a devotee’s house is called Ayyappa Yogam. It may last for an hour to an hour and a half.

A Guruswamy (Ayyappa Devotee who has completed several years of Sabarimala Darshan) may be selected as ‘Yogapramukh’ – leader – to conduct the proceedings. 3-4 Assistants also may be selected to help the Yogapramukh.

Ayyappa Yogam is held once a week, on any day convenient to the devotees, preferably Saturday.

A photo of Lord Ayyappa decorated with garland made of fresh flowers is the centre piece of this program. The surroundings shall be clean, ambience serene and fragrant with the smell of agar bathi (joss sticks) and dhoopam (benzoingum).

The program begins by lighting of lamp (Nilavilakku) by a Senior Guruswamy with the accompaniment of ‘Saranam Ayyappa’ (Sarana ghosham) chants by all devotees. This is followed by singing of  hymns (bhajans), a short discourse on spiritual / religious / cultural / contemporary topics, chanting of shlokas etc. The program concludes with deepa aradhana or karpoora aarathi to the accompaniment of ‘Saranaghosham’ and/or ‘Hari Varasanam’ song. Devotees partake prasad after this. Annadanam is also done in some places. Before the congregation disperses, the venue and date for the next assembly is also announced.

This in short is the format of Ayyappa Yogam.

The birth star of Lord Ayyappa is ‘Uthram’ (Uttara Phalguni, in Samskrutam). Uthram star occurs every month. Monthly Uthram Pooja is an important event in the Ayyappa Yogam calendar. The format of Uthram Pooja is very similar to the weekly Ayyappa Yogam. It may involve more invitees, duration may extend up to an hour and a half and emphasis may be on puja and bhajans. Usually ‘Shri Dharma Sastha Ashtothara Shatha  Namam’ (108 names) or ‘Sahasra Namam’ (1008 names) is also recited on this occasion.