Hariharatmaja Ashtakam or Harivarasanam in short, is a hymn in sanskrit sung as a lullaby every night at the Sabarimala Swami Ayyappan’s sannidhanam (sanctum sanctorum) before the door is closed. This hymn was composed in 1923 by Smt. Konnakath Janaki Amma, an Ayyappa devotee and native of Anandeswaram in Alappuzha district, Kerala. It is the centenary year of this divine song. 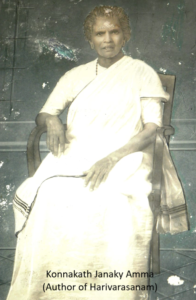 The song became popular through the voice of Ganagandharvan Dr. K. J.  Yesudas, under the music direction of Devarajan Master, in the famous Malayalam movie ‘Swami Ayyappan’ released in 1975. It is believed that the practice of singing this hymn in Sabarimala Temple has been going on since circa 1952. 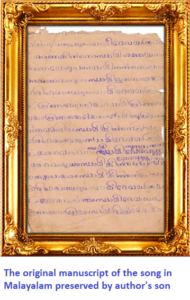 Sampoojya Chinmayananda Swami, Vimochanananda Swami, Kampamkudi Sundaram Iyer, P.T.Rajan Swami, Nawab Rajamanickam Swami, Rajaguru M.N Nambiar Swami etc. had devoted their entire lives to the protection of Sabarimala and propagation of Ayyappa Dharma. It is our duty as Ayyappa devotees living in this generation to pay homage to the memory of these great Ayyappa devotees in a befitting manner.  Equally important in today’s situation is to present and spread the glory of Ayyappa Dharma all over the world.

Keeping all these objectives in mind, it was decided to celebrate the centenary of Harivarasanam, under the auspices of a global/national celebration committee, comprising of all Ayyappa devotees, Ayyappa organizations, spiritual organizations, Hindu movements, Acharyas, Maths and eminent persons in various fields.  Similarly separate committees are being formed at the state, district, taluk and panchayat level throughout the country.

Harivarasanam centenary celebrations commenced on 29 August 2022 with a grand inauguration function at Panthalam, the birth place of Ayyappa. It will conclude in January 2024. During the 18 month long celebrations, various competitions will be organized for children and youth of different age groups across the country in performing arts, cultural and spiritual subjects etc. Seminars, spiritual discourses, moral classes, Guruswami Vandanam, processions, mass recitation of the song and other programs aimed at propagating Ayyappa Dharma are being planned across the country.  Also, Ayyapa Ratha Yatras are planned in many states as part of the celebrations.

In January 2024, mass chanting yajna of Harivarasanam is being planned on a global scale with the participation of millions of devotees in temples, mutts, bhajan mandalies and homes.

Global Ayyappa Maha Sangamam is planned on 20th and 21st January 2024 at Kollam in Kerala. Prime Minister Shri Narendra Modi will be invited to grace the function.