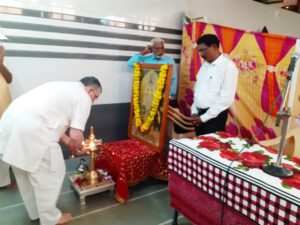 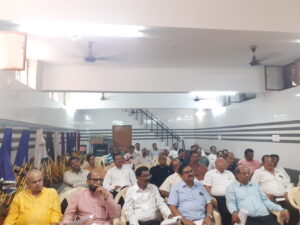 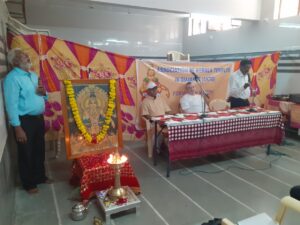 There are 32 temples in Gujarat consecrated in the Kerala style by tantra vidhi, prana pratishta etc. and managed by independent trusts and societies of domiciled Keralites. Of these, 31 are Ayyappa temples and one is a Krishna temple. These temples are spread over entire Gujarat, from Umargam in the south, on the Maharashtra border to Mehsana in the north to Gandhidham in the west.

Sabarimala Ayyappa Seva Samajam took the initiative to bring all these trusts and societies operating the Kerala style temples under one forum, Association of Kerala Temples in Gujarat (AKTG).

The objectives of the association are:

After the inaugural session, the draft byelaws of AKTG was presented by Shri Lekshminarayanan, President, North West Zone, SASS. After detailed clause by clause discussions, the meeting adopted the byelaws unanimously. An ad hoc committee comprising the following members was constituted:

Shri Mohan Nair has consented to be the Patron of the association.

The hosts, Ayyappa Temple, Gandhi Nagar hosted a sumptuous lunch and presented mementos to all delegates.